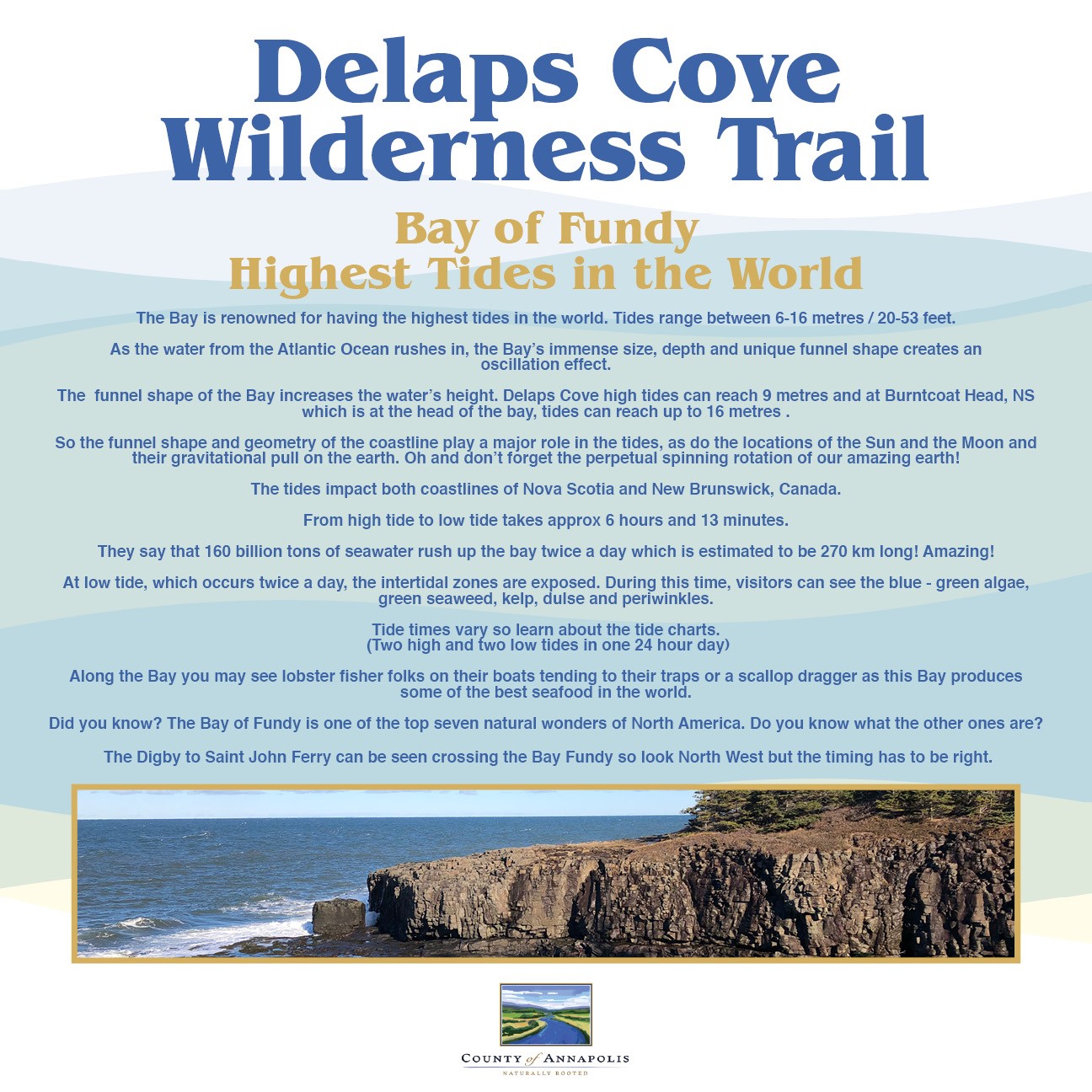 The Trail meanders through 130 acres of canopied forests. Nature enthusiasts may enjoy the natural splendour of the area and breathe in the briny, salt air that surrounds the windswept coastline of the Bay of Fundy. As well as being a great place to hike, the trail provides opportunities for bird watching and photography. Use the Delaps Cove Wilderness Trail Guide (located at the trail head) to identify the fauna and flora or to provide an historical perspective to the area.

The Municipality of the County of Annapolis purchased lands from Bowater Mersey Paper Company Ltd.to create the wilderness trail, which has been been managed and maintained by Recreation Services since 1985.

>The area surrounding the trail system was once a thriving Black settlement with, at one time, close to 70 inhabitants. Census records show that this community was in existence since at least 1838, but it probably dates back much earlier, perhaps to the period after the American Revolution, when many Free Blacks received grants of land in the County.

Visitors can observe rock walls, foundations and lilac bushes on more remote areas of the trail. Names popular at this time include Pomp, Scank, Francis, Sims, Esser, Brothers and Morton.

The wilderness trail system officially opened in 1985. Bohaker and Charlies Trail are the two main routes in the system. The Old Shore Road, an abandoned provincial road, connects these two trails. The lands between the trails are privately owned.

The trail encompasses three main ecosystems: (1) forest, (2) coastline, and (3) stream. Each ecosystem has its own unique flora and fauna. Interpretation sites are located along the trail to provide you with information about the natural habitat.

The Bay of Fundy

is renowned for having the highest tides in the world. Tides range between 6-14 metres/20-45 feet. The Bay of Fundy is, because of its particular shape, in tune with the natural rhythm of the tides. Harmonic vibrations result from the interaction between the tidal cycle and the Bay, and these variations result in extra high and low tides.

At low tide, which occurs twice a day, the intertidal zones are exposed. During this time, visitors can see the blue-green algae, green seaweed and periwinkles. Other common sites are blue mussels, kelp and dulse. Dulse is a reddish or purplish, thin, veinless sheet. It grows at the low tide mark, and locals dry it for a great salty snack!

The rocks in this area are covered with seaweed - it's very slippery and can hide other hazards underfoot.

The trail is named for its proximity to Bohaker Brook, which, in turn, was named for an early landowner. 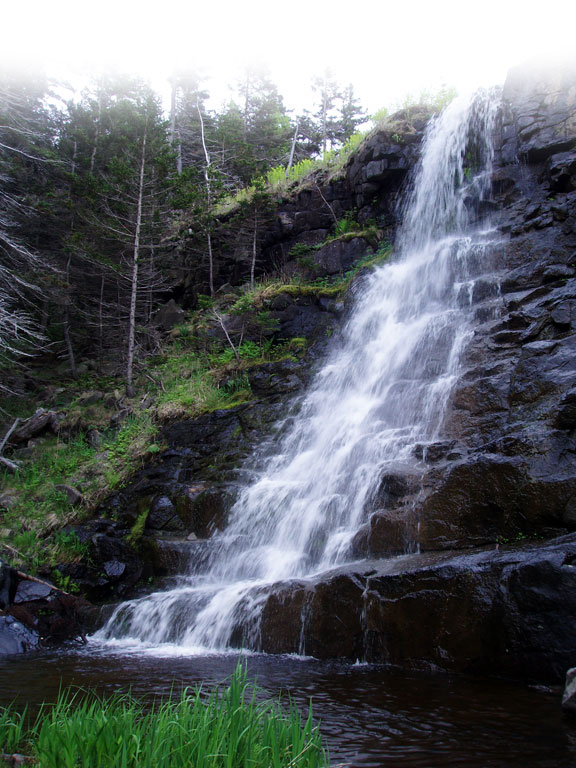 The trail will take approximately one hour to hike. Visit the 43 foot waterfall at Bohaker Cove and view the basalt lava rocks that can be seen on the cliff from the viewing platform.

A multitude of plant species grow in the woods along the trail. The ground cover includes the broad or large-leafed aster, bunch berries and many species of ferns. Nova Scotia's provincial flower, the Mayflower, can be found in hidden patches along the trail in the early spring. Cranberries grow along the shore; from the leaves of seaside plantain come marsh greens; and seaside Dulse is another good source of vitamins and makes a healthy snack when dried.

The hike to Charlies Trail and return will take approximately three to four hours, and it will follow the Old Shore Road, an abandoned provincial road. Visitors are advised that some logging does occur on private lands between the two trails. The trail entrance is located west of Sloan's Brook and before Charlies Brook (see Key Map).

The viewing platform at Charlies Cove provides views of the Cove, and from this location you might be able to catch a glimpse of the Digby-to-Saint John ferry crossing the Bay of Fundy. The trail passes along the foundation of the Pomp homestead, which may have sheltered as many as ten people, as homes were small and families large.

The majority of ground cover on Charlies Trail, besides the ferns (Cinnamon, Long-Beech and Bracken), is composed of smaller, less conspicuous plants, such as the shiny, three-leafed Goldthread. Early settlers 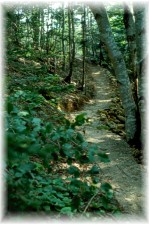 used Goldthread to sooth mouth and throat pain. Bayberry shrubs and bunch berries can also be found along the trail.

The Municipality of the County of Annapolis does not constantly supervise and/or maintain the trail system and assumes no responsibility for the safety of trail users. We recommend that users stay on the trails and be wary of the uneven trail surface and nearby cliffs. Children should be closely supervised.

Please exercise safe outdoor recreation practices and always remember to tell someone where you are going and when you expect to return. Please do not leave valuables in your vehicle.

Hunting is a popular activity in Nova Scotia. Please remember you are hiking in a wilderness area, and wearing "hunter orange" is advisable during hunting seasons (September to the latter part of December). Hunting on Sunday is illegal in Nova Scotia. 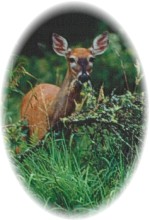 These are the approximate hunting season dates in Nova Scotia:

Call the Department of Natural Resources in Lawrencetown for more specifics: (902) 584-2229

We appreciate feedback from your visit. Email us at: Click Here

and more people are going into the wilderness as access to it becomes easier and our desire to "get away from it all" increases. With this increased use, we not only have to be concerned with our effect on the environment and wildlife, we also have an increased responsibility to respect the land and others we encounter in the wilderness.

When using our wilderness, be sure to follow the conservation message of

the Annapolis County Back Country Watch Program: "Keep a Watchful Eye on Our Wilderness and Help Keep it Clean"