On August 13th, Annapolis County Warden Reg Ritchie joined over 40 other delegates and headed to Europe with the goal of learning more about aquaculture and the opportunities that could evolve from that seafood industry.

The Atlantic Canada Fish Farming Association (ACFFA) hosts a trade mission every two years, inviting officials and fishery industry operators from all over Atlantic Canada to travel outside the area to gain knowledge, make connections and discover the opportunities in aquaculture. This year, the group visited Ireland and Norway to learn about the challenges and successes they have encountered in this industry.

“When I received the call from Pamela Parker, ACFFA Executive Director, with the invite I was surprised and thrilled. I knew it would be an amazing experience,” said Warden Ritchie.

“Admittedly, I’m not very familiar with fish farming so the opportunity to learn about this industry and what it has to offer was very appealing,” Ritchie explained, adding, “It allowed me the chance to explore sustainable economic prospects with other individuals who share this common goal; particularly the other three municipal representatives from Southwestern Nova Scotia.” (Aldric d’Entremont Warden for the Municipality of the District of Argyle; Ben Cleveland, Mayor of the Town of Digby and Roger Taylor Warden for the Municipality of the District of Shelburne).

ACFFA cites in their blog that Atlantic Canada already produces almost 50 per cent of all the farmed salmon in North America, but as Warden Ritchie points out there are still challenges out there, pointing out that our region’s success and obstacles were the reason visiting Ireland and Norway was a perfect fit because they also have similar stories.

Norway, the world’s leader in salmon aquaculture, is a true success story with fish farming now being the country’s 2nd most lucrative industry after oil.

Norway’s goal by 2025is to produce 2.7 million tonnes of salmon and trout – enough to feed 100 million people, a production level that translates to 56,000 full-time equivalent jobs.

That was an eye-opening statistic for mission members who understand the financial challenges of Atlantic Canada.

Warden Ritchie says he believes much of this success can be attributed to the huge governmental support the region receives, saying “In our case, fisheries may be a Provincial matter but it is not feasible without support from all levels of government.”

Warden Ritchie admitted one of the main concerns he hears from residents in regards to aquaculture is the environmental impact on the area, but he understands that this is not a solitary problem to Nova Scotia.

One of the most inspiring initiatives he observed was Norway’s determination to strive towards a “natural” way to eliminate salmon lice.

“When farming salmon we were told a persistent problem farmers face is that of salmon lice and the treatment is a medication added to the food that, eventually, ends up on the sea floor.”

“However, the Norwegians have discovered Lump fish will eat the lice off salmon eliminating the need to medicate the food,” he related, “so they’ve started farming Lump fish to use as a natural pesticide for their salmon and it’s working very well.”

The Warden admits he doesn’t see Annapolis County as the next Norway and he adds, “At the end of the day, it’s not a municipal initiative, it’s a provincial one but our part is to get educated and provide support to the fisheries industry.”

“The strength and growth isn’t in a single municipal unit taking action, it’s in the voice of many municipal units collaborating and showing support to the Province and helping one another strive towards success.”

Consensus among the mission members was that fish farming provides an opportunity for Atlantic Canada that should not be ignored but rather explored in a collaborative effort.

Warden Ritchie said everyone returned home exhausted but energized and anxious to focus their newly gained knowledge on the potential sustainable growth this could offer the region, admitting he isn’t sure if there’s a viable aquaculture future for Annapolis County but he appreciated the opportunity to learn about the industry and be better educated on the topic.

“My experience was extremely positive. I was able to learn a lot about this issue and the opportunities it offers,” said Ritchie. “However, as with all decisions, there will always be pros and cons in any situation and hearing from both sides is very important.”

The Warden said he is looking forward to seeing many of the people who travelled with him at next month’s Atlantic Mayor’s Congress in Shediac, NB.

“It will be nice to hear their thoughts and plans now we’ve had time to process the information and get some rest,” he laughed. “Success branches out so if we support our fishing industry regionally the benefits will have a positive effect on the overall economy. Regardless of the differences in our regions, economic growth is a common goal so encouraging and helping one another is a win-win for everyone.”

Warden Ritchie relayed a huge thank to the ACFFA for arranging and funding the mission.

For more information on this industry visit www.salmonfarming.org. 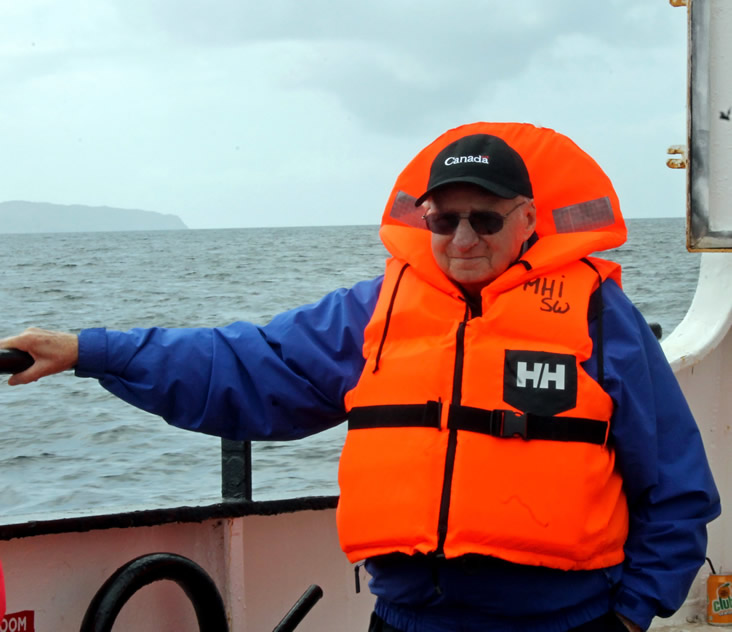