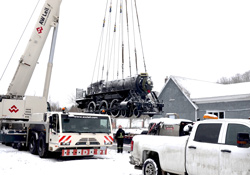 The locomotive being lifted off the truck in Middleton Dec. 18. LAWRENCE POWELLThey put a giant wreath with a red bow on it.

The career railroader spearheaded efforts to bring the 75-ton steam locomotive to the Middleton Railway Museum and they poured on the steam last week to get the 115-year-old engine moving again.

The engine was gifted to the Middleton Railway Museum Society by the County of Annapolis after it became surplus at the former Upper Clements Park that had closed down. The municipality bought the park which will be the future home of Gordonstoun Nova Scotia, the first franchise of the famous international boarding school Gordonstoun Scotland.

It took a lot of effort to get the old engine moving.

Besides Annapolis County, a key player in the locomotive project has been CN, which created the infrastructure on which to place the train.

Also integral to the project is the Annapolis Valley Trails Coalition with coordinator Rick Jacques and his crew. That group moved the Harvest Moon Trail a dozen feet north to provide more separation between the trail and the museum.

CHAIR OF THE BOARD OF CN 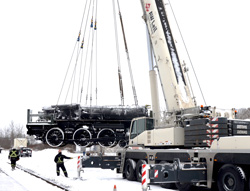 The A.W. Leil crane swings the locomotive around. LAWRENCE POWELLRobert Pace, Chair of CN’s Board of Directors jumped in too.

“CN is proud to be associated with the Middleton Railway Museum.  We were delighted to be asked to be involved in this project and to provide the track infrastructure required to support the 75-ton locomotive and tender in front of the historic railway station in Middleton, NS,” he said just before the engine was moved on Dec. 16. “This initiative is a great success story for the museum as well as for CN.  I am confident it will result in a significant increase in tourism across the region and help boost the economy. I am very grateful for the professional and dedicated efforts of the CN team who were part of this mission. I am sure they will cherish their involvement in this project for years to come.”

“It’s great to see community partners and CN come together to make this project a reality,” said Premier Stephen McNeil, the MLA for Annapolis. “The locomotive will be a fine addition to the railway museum, and help attract more visitors to the area. Congratulations to all involved.” 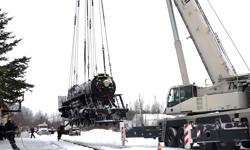 The locomotive is lowered to the new track built by CN. LAWRENCE POWELL“The Middleton Railway Museum Society is both pleased and honored to accept the gift of the 115-year-old steam locomotive from the Municipality of the County of Annapolis,” said museum board chair Dianne Hankinson LeGard. “During the past several months many individuals and companies have offered their time and services to prepare the station and grounds for the locomotive’s arrival.”

She said the Middleton Railway Museum, located in the old Dominion Atlantic Railway station, has a great and historic past.

“The station was used by both CP and CN, and Middleton was considered the Freight Terminal for the Annapolis Valley in the early 1900s,” she said. “The purpose of the MRMS is the preserve and present Middleton’s railway heritage.” 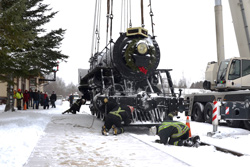 The locomotive sits on the new track built by CN. LAWRENCE POWELLof equipment and housings to allow the train to fit through overpasses on Highway 101 on the day of the move.

The smokestack, whistle, and old wooden cab were removed, along with various other pieces of equipment.

The locomotive didn’t travel under its own steam. There are no railway tracks anymore, and the old engine isn’t in working order at the moment. That’s why Adam Cudmore of A.W. Leil Cranes & Equipment has been onsite at Upper Clements several times to take measurements and figure out how to harness and lift it using a 350-ton crane.

All that work resulted in a successful lift Dec. 16 when the locomotive was lowered onto a flatbed and moved to Middleton the next morning where it sat at the museum until the next morning.

A small crowd had gathered by 8:30 a.m. Dec. 18 and were soon awed by the ease with which the giant crane lifted the locomotive from the flatbed truck to the waiting tracks. It was placed on the CN-built infrastructure and looked like it was meant to be there. The A.W. Leil crew and the trails coalition folk lifted the bell and smokestack back into position and lifted the tender car in behind the engine to complete the project.

“For some time after its arrival at the new track built by CN it will not be complete,” said MacDonald. “But it will slowly be put 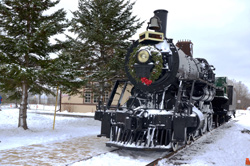 The locomotive sits proudly in front of the Middleton Railway Museum. LAWRENCE POWELback together, and be displayed for all to see and touch and marvel at. This locomotive is absolutely worth it.”

“I have no idea how many people have been involved in this project,” said MacDonald. “I lost track a long ago.”

He said like most good things, it takes a community to make things happen.

“A community of volunteers, professionals, big business, small business, multi levels of government -- and even more volunteers. Collaboration and cooperation of so many,” he said. “And at the end of the day, even though the locomotive will reside at the Middleton Railway Museum, it will belong to all of us, for generations to come. For all of us to come, and wonder, and dream, and touch, and wonder some more.”