About Keji and the cultural landscape

"That's where I spend my summers," he said. He puts his fingertips down on the long, low, wooden platform where he's sitting. "This is the building bed where we actually build the canoes."

He's at the far end of Merrymakedge, the sandy beach where people swim.

Todd Labrador paddles his latest birch bark canoe with his family at Kejimkujik National Park and Historic Site Oct. 13. For several years he’s set up a shop at the park with the public watching and participating. LAWRENCE POWELLKeji is also where Labrador's ancestors wintered going back as far as 6,000 years.

Autumn leaves of red, bronze, yellow have found their way under the big roll-up doors on the front of the building. He’s been packing up and there are few tools left in the shop. In the summer, visitors social distanced in front of those doors to catch glimpses of Labrador working. Pre-covid he would have invited them in and many would have found themselves with spruce roots or cedar ribs in hand helping him create a work of art. The spirits of the ancestors would have been there too, perhaps guiding his hands by times.

"We have a lot of visitors from all over. Actually all over the world," he said. "And sometimes they get to help us build the canoes." 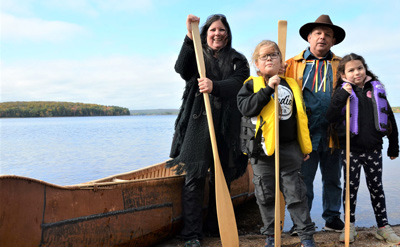 Todd Labrador, daughter Melissa, and grandchildren Nakuset and Tepkunaset after they paddled Labrador’s new birch bark canoe Oct. 13 at Keji. LAWRENCE POWELLThis day, Labrador launched a 21-and-a-half-foot birch bark canoe from the beach with help from his daughter and two grandchildren. The culture and traditions are not dead, and Kejimkujik National Park and Historic Site superintendent Jonathan Sheppard might even say they are more important now than ever before.

He sits across from Labrador. The small invited crowd there for the launch has left and the two have a chance to reflect. 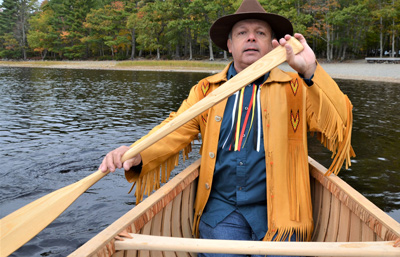 Todd Labrador kneels as he paddles this birch bark acoe that he built this past summer at Kejimkujik National Park and Historic Site. LAWRENCE POWELLHe said the project is so powerful for Parks Canada simply for the notion of having a Mi'kmaw presence on the land again.

"Todd's family is connected to this place, this land, this water. The designation of Kejimkujik as a national park and a national historic site is built on the notion of continuous presence in a cultural landscape," Sheppard said. "This, you know, is so neat because it's a question of connecting people with that Mi'kmaw perspective and Mi'kmaw presence on the land."

Sheppard said it's also about connecting the history. 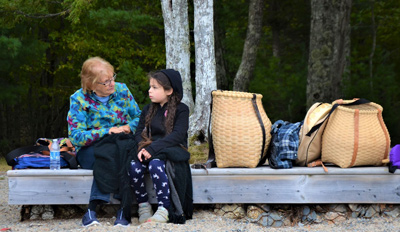 Todd Labrador’s mother and granddaughter Oct. 13 at the birch bark canoe launch ceremony. LAWRENCE POWELLLabrador, from nearby Wildcat Reserve, bridges past, present, and future, and his family is a big part of what he does. His daughter Milissa said a prayer during the launch. His grandchildren Nakuset and Tepkunaset both drummed and sang. They all paddled on the waters where generations of Mi'kmaw lived even before the Great Pyramids of Egypt were built. Projectile points found at recent archeological digs at nearby Eel Weir Bridge date back more than 6,000 years.

Sheppard said that many historic sites talk about things that have happened in the past. “But with this work with Todd, you know, I think we’re together able to talk a little bit about what the future is going to look like. And it’s about real questions around ensuring that a place like this, a Mi’kmaw cultural landscape, still has Mi’kmaw people harvesting bark, building canoes, sharing knowledge, you know, those kinds of things.”

Sheppard said that’s part of what’s been so powerful. 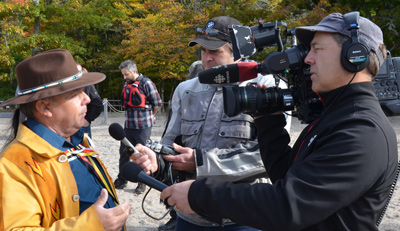 Todd Labrador being interviewed following the ceremonial launch of his most recent birch bark canoe. LAWRENCE POWELLThe other thing is Todd Labrador as a teacher. The public is fascinated watching him build the canoes from bits and pieces of spruce and birch and cedar from the forest. But it’s more than that.

“He’s talking not only of making these canoes but also a way of being,” said Sheppard. “A way of being connected to the land, connected to nature, thinking about, you know, what’s really of value in the protecting of a landscape like Kejimkujik. So those notions of protection and culture, of hands-on engagement are things that I think are also things that Todd has been sharing with visitors here.”

“I think the last thing is really thinking about how Mi’kmaw communities locally – like Todd is so open and generous with this. People come and work with Todd. In the past we’ve had youth from Bear River working side by side with him. People from other communities, people from all over the province, the country, around the world coming to connect,” said Sheppard. “But it’s also been a really amazing way of seeing that traditional knowledge passed down, and I think for us at Parks Canada being only even a part of being able to have that sort of presence on the landscape is really special.” 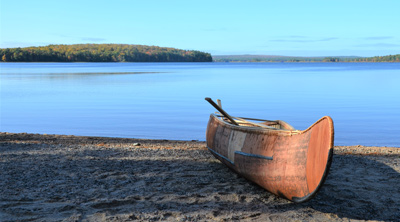 This 21.5-foot ocean-going birch bark canoe was built at Kejimkujik National Park and Historic Site during 2020. It was officially launched Oct. 13. LAWRENCE POWELL“For my ancestors the canoe was basically the vehicle of the time because we didn’t have horses. We didn’t have vehicles like cars,” said Labrador. He’s standing at the water’s edge with the newest canoe behind him. “In order to move or migrate from the ocean to the inland, if we wanted to bring our belongings and bring our families, we could put them all in the canoe and we could go in one trip.”

He jokes about the traditional birch bark canoe being able to transport everything you own, your family, and a moose. Or maybe he wasn’t exaggerating. His ocean-going canoe is big and stable, and the more you put in it, the more stable it becomes. The high sides in the middle are protection from taking on water in rough seas.

“The canoe was probably the most valuable item that our ancestors would have had,” he said.

And don’t forget the paddles. The paddles for this canoe were made by Charlie Hearn, and like the canoe, utilitarian works of art. 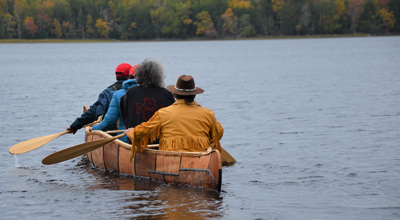 “From here we could take this canoe and I could go down the Mersey River into Rossignol (Lake) right through to the Atlantic Ocean in Liverpool. Or we could take it and go the other way and end up in Bear River and the Bay of Fundy. Paddle across to New Brunswick, you know. Down the New England States, down along the ocean, the coast. You could also go along the coast and end up in Cape Breton or Prince Edward Island. Our ancestors, that’s what they did, because the whole way along they could hunt and fish and get everything that they needed.”

Keji was an important place for the Mi’kmaw. Eel Weir Bridge is directly south of where Labrador is standing at Merrymakedge Beach. Archeologists dug about 50 test pits a few years ago when a new bridge was being constructed and came up with evidence that the spot where the Mersey flows from George Lake into Loon Lake was indeed a Mi’kmaw community where they sheltered and made projectile tips. 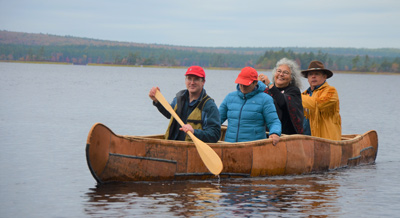 Master canoe builder Todd Labrador loves building canoes – and then sharing them with the public. LAWRENCE POWELL“Our ancestors would have spent the winters inland here in Keji because it was sheltered. It was warmer inland. Lots of snow, but also moose and caribou. So they had their food for the winter,” he said. “As the ice went out and things warmed up they’d head out to the coast along the ocean. And then they would live off the shellfish in the summertime. But also in the summertime when there’s a little bit of breeze and wind, there wouldn’t be so many flies. Because in June you wouldn’t want to be in Keji … because the flies would have a feast on you.”

Keji wasn’t the only wintering place for the Mi’kmaw. From Liverpool all the way across to Annapolis Royal there are about 250 known indigenous archeological sites along the Mersey River corridor, fully 25 per cent of all such sites in the province. 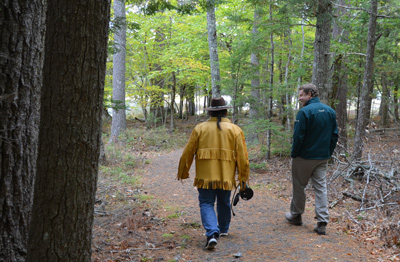 Master Canoe Builder Todd Labrador and Kejimkujik National Park and Historic Site Superintendent Jonathan Sheppard walk through the woods at Keji from Labrador’s workshop to the beach at Merrymakedge. LAWRENCE POWELLThe canoe came from living things from the forest, and Labrador often talks about the energy that comes from it.

“The energy in this canoe, it’s difficult to describe, but it’s an incredible energy and, you know, taking something from the forest and putting it together and using it to go across the lake,” he said. “The birch bark, the cedar, the spruce – it all has an incredible spiritual energy.”

He tells the story of an old dog barking at one of his canoes. Animals sense things.

“An old dog came out. The old dog could hardly walk. He came out and he looked up at my birch bark canoe on my truck and he started barking,” he said.

The owner didn’t know why.

“I think the dog can see my ancestors’ spirits all around that canoe,” he told the dog’s owner. “We can’t but the animal can sense that.”

“When I go in the canoe, especially when I go alone, It’s like being back in time. It’s like paddling back in time,” he said. “It almost puts you back there but it’s also a healing energy. When I have my grandkids in here and we go, it’s like we’re alone in the world, you know, and we’re in a different time. But it’s very special. Very spiritual, very healing.”

Labrador is paddling out from the beach. A hundred metres out and he comments that the water is cold. He’s kneeling because traditional birch bark canoes didn’t have seats. The water is cold but Labrador would canoe right up until the ice was in. He’d like to come back later in the fall and canoe.

“When we were kids, we didn’t have life jackets. And I used to go up to the edge of the ice, get my canoe on top, scurry across the ice and then dip it in the other end and away we’d go again,” he said.

He thinks that everybody should know that feeling – of being at water level and being part of the world. 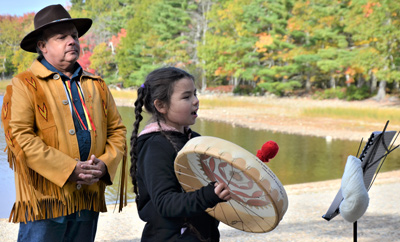 Todd Labrador watches as his granddaughter drums and sings during the launch ceremony for his latest birch bark canoe. LAWRENCE POWELLCorbin Hartt stands on the beach playing a wooden flute he crafted. He’s Labrador’s son-in-law and part of the ceremony and canoe launch. The flute has a rich, low timbre that feels like the trees, the pine needles, the bark. Moss. The call of the loon. The tune carries on the mirror-still water where guests are given the gift of paddling a real Mi’kmaw canoe.

“You don’t always get an opportunity to paddle a birch bark canoe,” Labrador said. “So when I have the opportunity to share, that’s what I love to do. And that’s why we build in public. So we can share every bit of it with the public. Sometimes we don’t get much work done, but we have fun.”