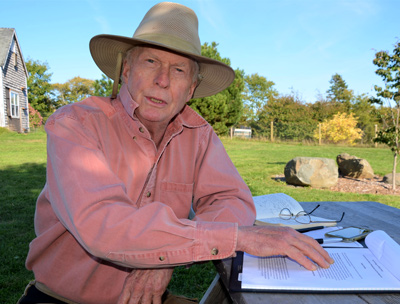 Gregory Heming, councillor for District 5 in Annapolis County, isn’t seeking re-election. He’s been busy over eight years and isn’t slowing down. LAWRENCE POWELL PHOTOPORT ROYAL, NS – Saving the world seems like a complicated business, but when Gregory Heming weighs in on the subject he has some common-sense ideas that involve small communities working together.

He’s talking about neighbourliness. Municipal policy with compassion as its foundation.

“It’s going to be around a lot of those principles that Annapolis County now has in place,” he said in an interview, “which is taking care of our own – take care of local needs from local resources. Not take too much of your forest land. I think that’s the key.”

He’s spent the last eight years trying to get people to realize there is a problem and that there is something they can do about it. But it needed to be formalized in municipal government policy. The approach has put Annapolis County at the forefront of efforts to deal with climate change and a whole host of other related issues.

He hopes, that because of efforts of council over his two terms, that residents of Annapolis County will be better able to cope with what climate change brings from sea level rise and extreme weather events to energy and food sustainability and an influx of climate refugees.

He’s a two-term municipal councillor for District 5, but when nomination day for upcoming municipal elections rolled around, Heming had not re-offered. When he provided comments at the Municipality of the County of Annapolis Sept. 15 council meeting, it was his version of an exit interview—the great things begun or accomplished and the dire need to do more.

So he set the stage with a brief on his motivation to seek office in 2012 after a lifetime of ecological and environmental work that at one time saw him live in a remote part of the Yukon in a small cabin. He even crossed Northern Canada with an inflatable giant salmon from which he taught and talked about environmental issues and humankind’s responsibilities and obligations to nature.

He wrote his first paper on climate change in 1972

“In 1961, in honor of the right Hon. Vincent Massey, former Governor General of Canada, CBC radio cosponsored with Massey College in the University of Toronto, what was to become the Massey Lectures,” Heming said. “Those lectures enabled distinguished authorities to communicate the results of original studies on the subjects of contemporary interest. In 2004 novelist, historian, and essayist Ronald Wright delivered his lecture entitled ‘A Short History of Progress.’

WISDOM OF OUR ACTIONS

What stuck with Heming all the years since hearing Wright’s lecture was the following statement he made regarding the climate crisis: “The future of everything we have accomplished since human intelligence evolved will depend on the wisdom of our actions over the next few years.”

“It was this notion that motivated me to first run for council back in 2012,” Heming said. “I wanted to test the idea that local government could add substantially to the body of wisdom that will somehow allow humanity to continue.”

He said he now believes that the municipality has demonstrated its willingness to do just that by setting out strategies to: produce and distribute its own sources of food; produce and distribute its own sources of renewable energy; initiate its own place-based educational system grounded in the humanities, volunteerism, and mentorship; provide safe, efficient and affordable housing; maintain clean air, water, and uncontaminated soil; and initiate a municipal ecological forestry strategy meant to preserve and protect significant forest land while creating local employment through value-added industry.

“And all of these were to be understood in terms of climate change adaptation and mitigation as a direct response to citizens’ demand to declare a climate emergency,” he said.

Will humanity survive and can municipal governments play a part?

“I believe that the Municipality of the County of Annapolis has demonstrated such a possibility,” he said. “Now, as I near the completion of my final term as a municipal councillor, I acknowledge there remains work to be done.”

He believes the municipality must seek to: 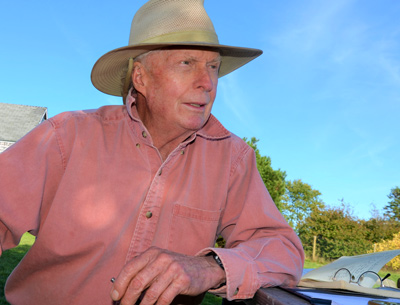 If you thought Heming just attended a few council meetings every month, you’d be wrong. He was influential on municipal committees that dealt with forestry issues and helped inform the Dr. Bill Lahey report on forestry; and that planned the county’s climate action summit that attracted numerous delegates from the county and beyond. All the while he was, and is, doing other related work outside his municipal role.

Despite CoVID-19 and its call for social distancing, Heming took part in the virtual version of the 2020 Thinkers Lodge Retreat on Climate Crisis, the fifth edition of an annual event he helped start a few years ago as a partnership between the Centre for Local Prosperity and the Thinkers Lodge in Pugwash.

In the 86-page document ‘Atlantic Canada: Conversations on an Uncertain Future,’ that summarized the Retreat, Heming said something that related directly back to his motivation for seeking office and his experience on municipal council.

“I am considering drafting a Municipal Manifesto for Transformation through which a municipal council can filter, refine, and amend all council decisions in order to encourage a social, legal, economic, and political transformation for the 21st century,” he wrote. “This manifesto will acknowledge that citizens have a right and a responsibility to participate in decisions that affect their lives. And further, at a minimum, this manifesto will make specific reference to: 1. Precautionary principle including a bill of rights for nature; 2. Full acknowledgement and acceptance of Treaty Rights to insure remediation, reclamation, and climate justice; 3. A bill of rights for climate displaced persons.”

“We find ourselves living on unstable ground. It is time to give up the notion of experts and people in power leading the way,” said Heming, senior advisor to the Centre for Local Prosperity at the time, in a media release announcing the release of the report. “We need to follow our own noses. This report encourages us to find stability in clean air, local food, sane politics, and fair and just communities.”

Heming has been asked to submit a feature article to Municipal World publication for their next issue and is working on several of the topics he raised in his councillor comments September 15.

He’s also working with Clean Annapolis River Project and Parks Canada on a ‘rewilding’ of five acres of his land adjacent to Melanson Settlement as a demonstration project to encourage others to do the same. It includes planting about 230 trees.

“There are also two other projects I am pursuing that are a continuation of my municipal work: Interorganizational Panel on Climate Solutions (IPCS) which I incorporated federally last year and a local/global climate displaced persons initiative.”

Part of that latter project will be to create that bill of rights for landless people as a result of rising sea levels, drought, and war.

“Even though it falls apart, there’s going to be some stability in these small places like Annapolis County,” he said of the future. “We’re just on that little, fragile precipice, but I think we can either fall forward into absolute chaos or we could fall back into these small stable communities. That’s where I think the future is.”