By Lawrence Powell
For Annapolis County

ROUND HILL, NS – Linda Hulme Leahy remembers moving in to the house across from the community hall. She didn’t know then that the old wooden structure on the side of Highway 201 would come to mean so much to her and husband Miles. 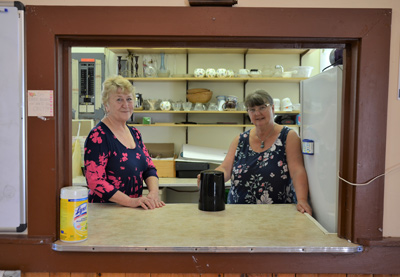 Goldie Luckey and Linda Hulme Leahy in the kitchen of the Round Hill Hall. The hall will receive $2,400 from the Municipality of the County of Annapolis this year for much-needed work on the building. LAWRENCE POWELL PHOTO“We came here four years ago and moved almost right across the road from the building,” she said. “To us, when we moved to this community, it was our gateway into learning about the place.”

They found out just how enriching the old hall is for a community that has lost so many meeting places.

“We weren’t here when there was a school, a church, or anything else where people gathered – grocery store,” she said. “So this is it. It was our way to find out who actually lives here and why this building is so important.”

In fact the building has been significant in the community dating back to the late 1800s. And the Round Hill Hall Company was incorporated in 1889. Uses for the hall today are probably not dissimilar to the uses 131 years ago, and it’s always been about community.

“Over time we found people using it for very important family reasons, like funeral receptions, baby showers, wedding showers,” said Hulme Leahy. “Significant family things happen in this place. It’s a gathering place. When you see a potluck, people show up that you would never see because we’re so spread out all over the place here. When people come it’s their opportunity to catch up with their neighbours, see how much the kids have grown and, you know, really maintain a connection. If we didn’t have this building we would have no connections, or no opportunities for it.”

The Round Hill Hall Company is one of three Annapolis County community hall groups receiving funds from the municipality to help with projects to upgrade facilities and grounds. Council approved the funds under the municipality’s Community Halls and Centres Assistance Program at a recent meeting.

The Tupperville Community Hall Association receives $1,200 to assist with the installation of four new windows and repair of a wall. The hall is a few kilometres up the highway from Round Hill and is another historic building at the heart of a community.

And on the Bay of Fundy, the Margaretsville Community Hall Society will receive $2,400 to help with roof repairs, purchase of new tables and chairs, landscaping, fencing, and replacement of the flag pole.

The funds for the Margaretsville hall are, in part, to assist with a $11,232 roof project. Although it’s been repaired several times it must now be replaced before further deterioration causes damage to the structure.

And the Round Hill Hall Company also gets $2,400 to help with several upgrades and renovations including a new oil tank, work on the roof, insulation, and door replacements.

Goldie Luckey, Round Hill Hall board treasurer, said they had hoped to buy heat pumps to save on costs, but priorities had to be shifted as such things as an expired oil tank, put that project on the back burner. Proposed work in 2020 includes switching out that oil tank, basement insulation, roof replacement, and back wall and basement door replacement – to the tune of $20,731.

Annapolis County has helped out with annual grants of $2,400 in the three previous years at Round Hill when work totaling $13,506 was completed.

Hulme Leahy, who is now the board secretary, has met some wonderful people because of the hall. Farmers and families that have been here for generations.

“People like that gave us the threads that weave the fabric of Round Hill,” she said. “If it weren’t for this building we would not have had that. We would likely have taken longer to learn what this community is all about.”

Miles Leahy is now the vice-chair of the hall board and is often seen fixing things, building things, or checking on things. He’s been amazed and humbled by the kindness and generosity of the community and the warm welcome they have received. So they’re giving back.

Annapolis County isn’t the only source of revenue for the Round Hill Hall. Hulme Leahy herself held a Facebook fundraiser that set a goal of $500 but raised $615 as of Aug. 28. And she sold zucchini at the end of her driveway and has brought in $70 so far.

“People really seem to like zucchini,” she said. “Some folks paid $10 and $20 for zucchini, more than the asking price of $2 each.”

But the biggest and tastiest fundraiser is coming up next week.

“Local foodies Chantelle Webb and Chris and Shari-Lynn Williams are putting together a meal to auction off starting Aug. 31,” she said. “’A Labour of Love – a hyper local community fundraising feast’ invites people to bid on a delicious six course meal with ingredients donated from local sources, complete with wine and craft beer.”

She said the total package includes everything from smoked trout, cheeses, pickles, main course meals, and dessert – plus a gorgeous flower arrangement. It’s all delivered to the winning bidder’s door just in time for dinner on Sept. 5.

“It’ll be enough to feed six people and perfect for an end-of-summer celebration,” she said. “Chantelle and Shari-Lynn started a Facebook event and are posting updates on the meal details daily. And local businesses, farmers, and ordinary Joes have been contributing to the meal fundraiser with great generosity.”