HAMPTON MOUNTAIN, NS -- Deryk Eagles estimates it's about 80 years old. Kris Humphreys believes it sequesters about 3,400 tons of carbon dioxide. Olga Comeau has lived next door to it for more than five decades and believes it's integral to the health of the local watershed.

The three are sitting in the edge of forest on the side of the dusty Arlington Road atop Hampton Mountain where 50 years ago draft dodgers, back-to-the-landers, and the original hippies lived in slapped-together houses commune style.

People are drawn to this area.

It's 50 acres of green right now. Softwood, hardwood, moss, ferns, shrubs. An old stone wall marks the edge of Comeau's property. Humphreys lives across the road and Eagles lives a few kilometres away at Snow Lake Keep, an off-grid community where the residents live by gardening and raising their own animals as they nurture an old clear cut property back to health.

Adam Harris shows up with lemon squares and hands them out. Like lemon pie without the merangue. It's their second meeting in the same spot where flagging tape had been spotted and then chainsaws heard. It was Comeau's worst fears realized. 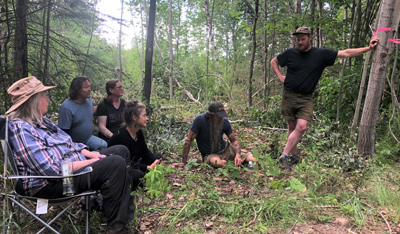 Olga Comeau, Rob Bright, Laura Bright, Kris Humphreys, Deryk Eagles, and Adam Harris met in the woods recently to sort out how they were going to raise $80,000 to buy 50 acres of forest that was destined for chainsaws. By Aug. 17 they had raised just over $57,000 and have an end-of-month deadlineto raise the rest. LAWRENCE POWELL PHOTO"I guess it all started when we first saw the flagging tape right there." She points above in the trees where pink tape still flutters. "I thought 'uh-oh, after all these years of him not coming in, all of a sudden they're there.' And then we had to go into action pretty quick."

It signaled cutting of some type, Comeau said. A few trees had been felled in what looks like the beginnings of a logging road.

"I came here about 20 years ago, and I came here because it's peaceful," said Humphreys. "It's a nature preserve in my mind, and when I saw the flagging tape, after what happened a few kilometres away on Hampton Mountain Road where they cleared a hundred acres in a matter of weeks -- I had a really sick feeling in my stomach when I saw flagging tape."

Humphreys talked to the guys cutting the access road and they gave her the owner's contact information.

"So I gave him a call and just stated that I was interested in preserving land that would otherwise be clear cut and wondered if he'd be interested in selling it, and he told me that he was a business man and everything was for sale," she said. "The asking price is $80,000. He doesn't have to sell it. Probably doesn't want to sell it, but was obliging enough to put a number on it. So my hope is that we can secure this and preserve this as a corridor because all around this area it's dwindling. Areas are being clear cut to the west and to the east of Chute Road and Arlington."

Last year Eagles and Harris tried to halt a clear cut operation on nearby Hampton Mountain Road but were unsuccessful. After the damage was done, they bought the 86 acres of tree stumps and slash and are offering it to young people intent on homesteading and nurturing the land back to health.

"We know we're not in a position to bargain and we're really just trying to raise the money," said Harris. “Eighty feels a bit staggering."

But apparently they have a lot of friends. They put out word on social media and money started trickling in a few dollars at a time. By the end of July they were more than halfway there but were out of time. Or they thought they were.

Comeau gave an update recently: “We started with a Facebook fundraiser and in just over a month raised over $52,000 of the 80,000 needed, she said. “The land owner generously gave us an extension for another month to raise the remaining funds.”

“We have also started the process of becoming a not-for-profit society and the land will be able to be registered in the society’s name,” she said. “We’re feeling very positive about it.”

“We submitted the name ‘North Mountain Protected Community Forest’ to the Joint Stocks Commission to be reserved for our NP status -- the first step involved in becoming a NP,” said Rob Bright. He’s waiting to hear back.

The GoFundMe page explains how the piece of forest fits into the bigger picture.

“Much of the North Mountain has been clear-cut and this 50 acres is in the middle of about 500 plus acres already owned by people concerned about protecting the forest, creating a space for migratory birds, wildlife habitat, a maturing forest and like-minded Nova Scotians to enjoy,” Comeau said. “Climate Crisis is looming over us and this is a way for people to contribute in a personal way, towards mitigating the effect.”

Those contributing to the purchase of this piece of wilderness are being assured that should they be successful in its acquisition, the property will be protected from any future cutting.

“It's between my two properties,” she said. “The one you can see there across the stone wall is my main property, but I have another property just on the other side that comprises quite a good size wetland, you know, with all the creatures that go along with wetland. And has a lovely stand of really old-growth pine on it.”

She’s concerned about preserving any forest.

“Because if we don't preserve the younger forests, we're never going to have old growth forests and there's so little left right now in the province,” she said.

She’s taken a bit of fire woodoff her property, and a few logs for building.

“I've run different programs and retreats where people would come here,” she said. “A lot of it was horse related. But we always spent time in the woods on the trails. People always benefited from the kind of energy this section of the forest seems to have."

She did therapeutic riding programs as well.

“One of the beauties of the forest trails with that was that these were kids that you know had such mobility issues that they would have never really have had an opportunity to go into rougher wood land,” she said. “To watch the change on their faces -- they would look up into the trees and listen to the wind in the trees. All that sort of thing. That certainly was very rewarding for them, for me, for all the volunteers that used to help."

She doesn’t want the forest to fall.

"My hope here is that we'll be able to buy it and it will just continue to grow as a lovely forest and that the wetland will be protected too -- that's and important part of this piece," she said.

“I'm involved because I want to see us turn around our climate disaster that we've created and I believe that growing trees is the most sensible approach to mitigating greenhouse gas emissions that we've created with our activities,” Humphreys said. She hasn’t done the measurements, but she estimates the 50-acre forest sequesters 3,400 tons of carbon dioxide.

“To put it in perspective … if you buy a new car and if you use that car for the duration of its lifetime, which would be approximately eight to 10 years, it would probably emit about 26 tons of CO2 in fuel emissions. A flight from Nova Scotia to BC would be about 16 tons -- for one flight.”

Saving a forest would be an offset to a lot of fossil fuel-burning activities.

"I believe that people is where this is happening. It's not happening in Halifax. It's not happening in the city,” she said. “People that live in rural communities are seeing this first hand every day and I think that approaching it from ground level where people are living, where people are hiking, where people are looking with their eyes seeing devestation -- approaching it from the point of view that you aren't helpless and to look at it with a sad heart keep driving is not the only option; that we have strength in numbers at the community level and that's where we can really impact it differently.”

And she’s not just talking about approaching foresters. “I think that that could be a whole new forestry model, but also for affecting change with some government policies around forestry practices."